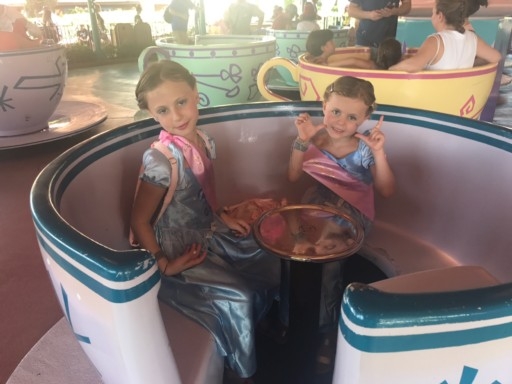 They say that Disney’s Magic Kingdom is the ‘happiest place on earth’.  There is certainly magic in the air but I also spied a few tantrums and not just our family!  The trick to a day at any of Disney’s Parks (especially the enormous Disney World ones), is to plan your day well and mitigate for all circumstances… weather, tiredness, hunger, kids demanding souvenirs…

We spent two days at Disney World’s Magic Kingdom in Orlando during the sweltering July heat. Luckily we were used to the heat of Hong Kong but if these climes are new to you, be prepared with lots of water, sun hats, sunglasses and start early in the day.

What do you need to prepare in advance?

Have everyone in comfortable clothes and shoes. Your kids might want to dress up in Disney outfits, in which case bring a change of clothes. If you are thinking about doing the Bibbidi Bobbidi Boutique, check out my previous post for tips.  As expected, Disney merchandise is expensive so you can save money buying this in advance from places like Walmart or online at Amazon and dole it out during your day.  Bring your own reusable water bottles and snacks.

Consider whether you want to bring a stroller. If you don’t usually use one, you may also want to rent one on the day or even the duration of your vacation e.g. Kingdom Stroller Buggy Rental.

In spite of all the amazing rides, one of Jetlag & Mayhem’s favourite things to do was to swap Disney pins with any Cast Member.  Here are some tips on how to do it and where to buy cheap Disney pins. They also loved getting autographs (from basically anyone in Florida!) and it’s worth purchasing autograph books in advance and having lots of pens on the day. 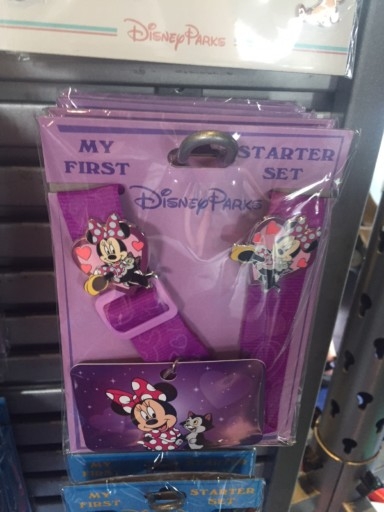 Every Disney visitor is entitled to 3 FastPasses per day. Once you have competed them, you can start booking more one by one. This can be done on the day either through the My Disney app (I highly recommend you download this) or at kiosks dotted around the Park. The My Disney App will also show you up to date queue times. There’s free wi-fi throughout the Park although I had to keep logging on and off. 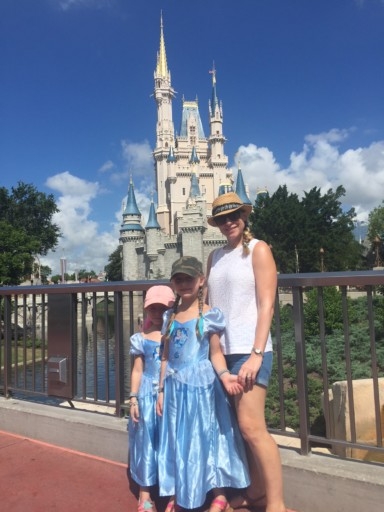 As we were staying at Disney’s Polynesian Village Resort, I had access to Disney’s FastPass+ system 60 days in advance vs 30 days for regular guests. This helped land me some well-timed FastPasses. If you are planning to get to the Park early (I highly recommend this), try to time your FastPasses+ for 10.30am to 1.30pm.  After you make your selections, you are given a choice of hour-long blocks of time to experience those attractions. I spent quite a bit of time researching which rides to do on each day. In the end I went for:

I chose two Character Greetings as I knew we were doing Bibbidi Bobbidi Boutique that morning so my girls would be dressed as Cinderella!

Of course your selection will be different dependent on the ages and ride preference of your party. I had to gear my day for an 8 and 5-year-old who love Princesses but also the odd roller coaster!

Day 1 At The Magic Kingdom

We had a headstart on the 9am park opening as we had an early slot at the Bibbidi Bobbidi Boutique. This meant we were already inside the Magic Kingdom and ran from Cinderella’s Castle straight to Frontierland at 9am. We were practically the first ones on Splash Mountain and loved it so much we rode it twice. We followed up the iconic Splash Mountain with another brilliant ride, Thunder Mountain where there was still only a small queue. IT REALLY DOES PAY TO GET TO THE MAGIC KINGDOM EARLY!

After a whirl on the teacups back in Fantasyland we made the only error of the day…. the Seven Dwarfs Mine Train.  Although I had a FastPass+ for this, I could only secure it for 4pm so thought whilst the Park was empty-ish we could ride it now and then use the FastPass+ on something else.  When we joined the Standby queue, the wait was 30 minutes. However as the Park continued to fill up and the early FastPass-ers dripped through, our wait was 90 minutes. I was worried we’d miss our next FastPass+ slot for Belle (you get an hour from the time allocated to go on the ride) but thankfully we made it in the nick of time. 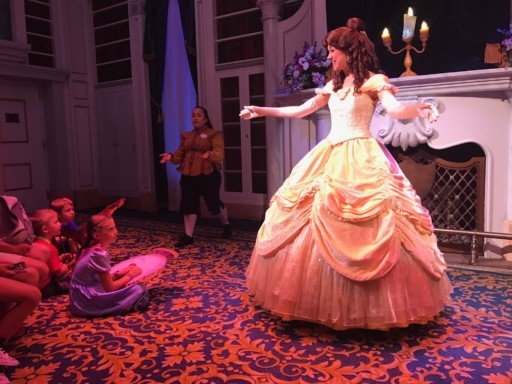 Enchanted Tales With Belle is magical, so much more than your average Character Greeting. After this we went to the Speedway in Tomorrowland which is notorious for its long queues. Thankfully we’d been the lucky recipients of some FastPasses in the hotel lobby (thank you to our anonymous donors) and so used them on this.  Be warned this ride can get extremely hot! 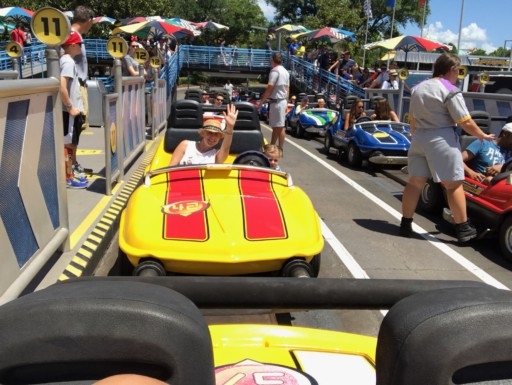 For lunch we headed to Cosmic Ray’s Starlight Cafe, opposite to the Speedway in Tomorrowland.  Whilst it is full of fried food, you can grab some lettuce for free (with the burger condiments) and force feed that on your children! 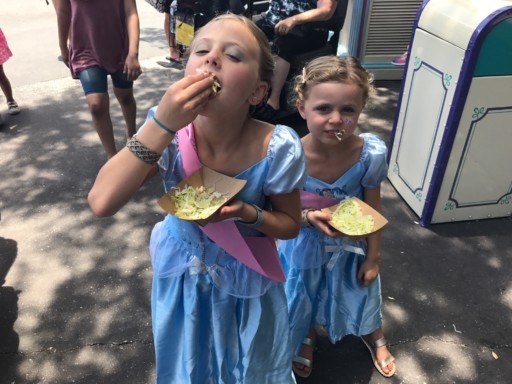 After lunch we headed for our FastPass+ Meet and Greet which was a double whammy, both Elena of Avalor and Cinderella.  Magic.  We couldn’t leave Fantasyland without a trip on the Carousel (Miss Mayhem’s favourite). I was able to secure a new FastPass+ as we’d used up our third on the Cinderella Meet. Then Miss Jetlag & I snuck off to the Haunted Mansion in Liberty Square (not a chance of getting Mayhem on that one!). I also indulged in one of my favourite Disney treats, a pineapple-tastic Dole whip that I remember savouring for the first time 30 years previously. You can find them sold all over the park.

At 2 or 3pm daily (check the schedule) is the incredible Disney Festival of Fantasy Parade. It will get crowded along the route although the Parade is so grande you’ll catch a view even if you’re not right at the front. Apparently the best place to view it is in Frontierland where it starts.

By about 4pm, the heat and fun had all got to us and we decided to head back to the Polynesian.

Day 2 at the Magic Kingdom

On your second day in the Park, familiarisation kicks in and you feel as if you can really nail it. We arrived early and ran straight to Frontierland to ride Splash Mountain again. Then we did Magic Carpets of Aladdin, Pirates of the Caribbean and the Jungle Cruise, all in Adventureland. 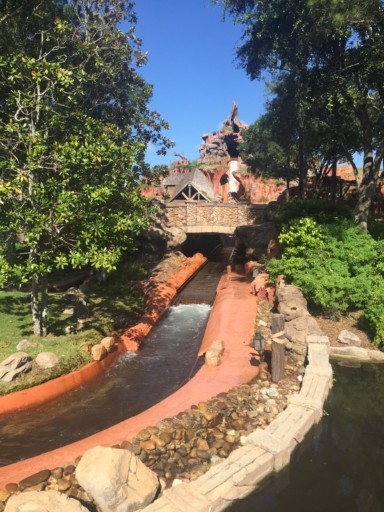 Then we headed to Fantasyland for one of my favourites, It’s a Small World before our FastPass+ time kicked in.  Our first two FastPass+ rides were in Fantasyland; Monsters Inc Laugh Floor (a very clever, funny show) and Buzz Lightyear’s Space Ranger Spin (possibly Miss Mayhem’s favourite).  Then Mr & Miss Jetlag bravely embarked on Space Mountain, thanks to the last of our gifted FastPasses+ (they loved it!). 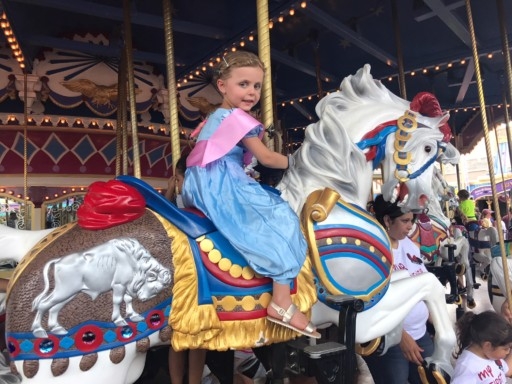 We had an unhealthy quick lunch outdoors at the Cool Ship in Toorrowland – pizza frusta (doughy pizza crusts), followed by ice-cream at Auntie Gravity’s.  The heavens opened for our first Disney downpour so we ran for cover on to the Tomorrowland Transit Authority People Mover.  I thought this would be a boring, pass the time ride but it’s well worth doing – you get a bird’s eye view on Tomorrowland and can even peer into Space Mountain. It was then on to our the famed Peter Pan’s Flights, one of the most popular rides for young kids. If you haven’t been able to get a FastPass+ for this, you may want to make this one of the first rides you head for as the queues can get crazy. 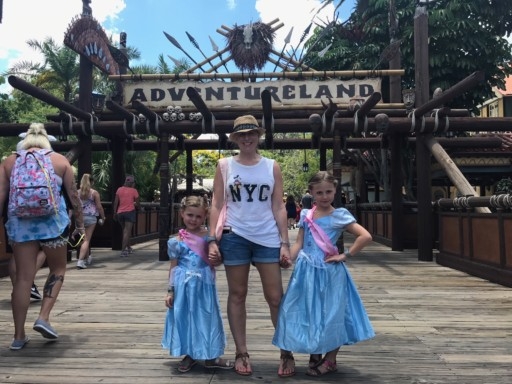 Having ridden our 3rd FastPass+ attraction, I was eligible for another. I booked one of my favourites It’s A Small World (you can’t get that song out of your head), followed by Dumbo then the Barnstormer, all in Fantasyland. Nearing 4pm it was time to call it a day. I probably could have carried on but everyone else was ready for a swim back at the pool.