In case you thought my fabulous luxury contributor Celine had had gone awol.. never fear, she is back with a review of the Four Seasons Resort Bali at Jimbaran Bay.  This was a family trip with kids (ages 8.5, 6 & 4), plus the grandparents in tow.  Bali is a beautiful Indonesian island, approx. 6 hours flight from Hong Kong (Celine’s base).  Although Bali is a tropical paradise for some, beware the crowds, traffic and dirty beaches of places like Kuta.  Bali tourism has stepped up its game, with huge beach clean ups this year.  They just need to sort out the horrendous traffic in certain parts of the island.  Celine’s main reason for a Bali visit was so that her kids could surf.  Needless to say, the kid friendly Jimbaran surf did not disappoint! 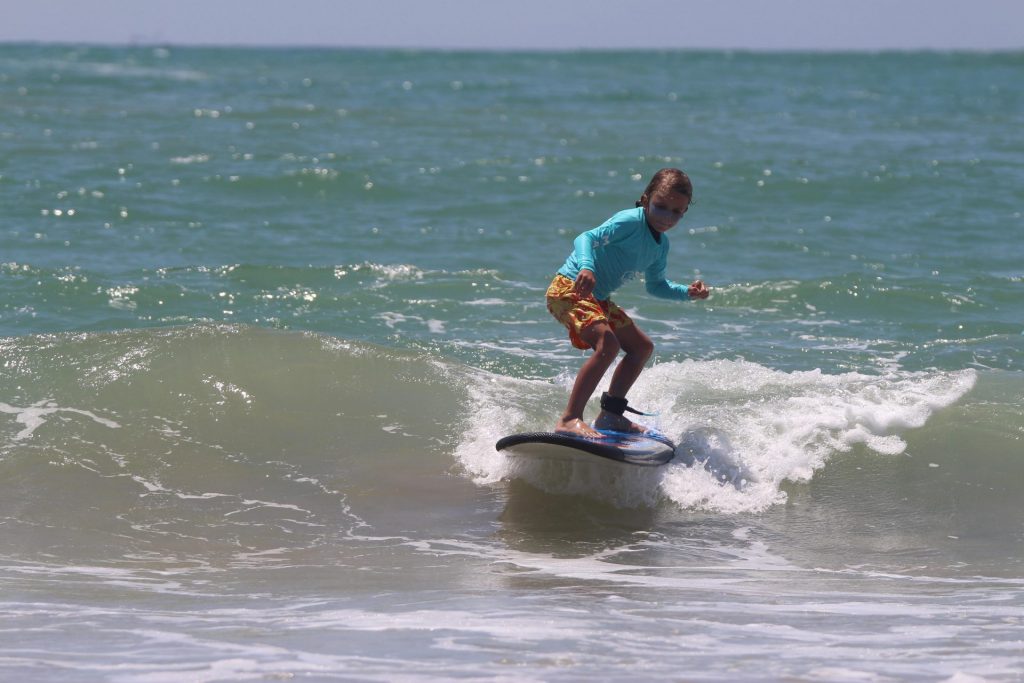 When did you go and how was the weather?

Mid-term break, first week of October, weather was perfect, hot and sunny during the day, a bit cooler in the evening

How did you book the trip? What was included in the package?

Did you request anything from your accommodation in advance?

An extra bed in one of the rooms

Did you need a visa? If so how easy was it to organize?

We took the VIP service following a previous (pre kid) bad experience at immigration… turned out kids under 5 and adults over 60 get the priority line so this would not have been necessary… I wished the hotel had mentioned it.

Worth paying if you are not priority people!

How was the flight?

How far was the hotel from the airport?  Did you arrange airport transfer in advance?

About 10km I believe… travel time depends widely on the traffic, we were lucky both ways. Yes we did arrange transfer from Four seasons but it was included in the residence deal. They offered a second one for my parents arriving later

M.A.S.S.I.V.E… the 3 bedroom residence is HUGE. First pavillion with living area and master on the top, huge private swimming pool with a whole shallow area on the side which was awesome for the kids. Another pavillion on the side of the pool with 2 bedrooms connected with an outdoor patio, kids cannot fall in the pool by accident but water is 3 steps down. 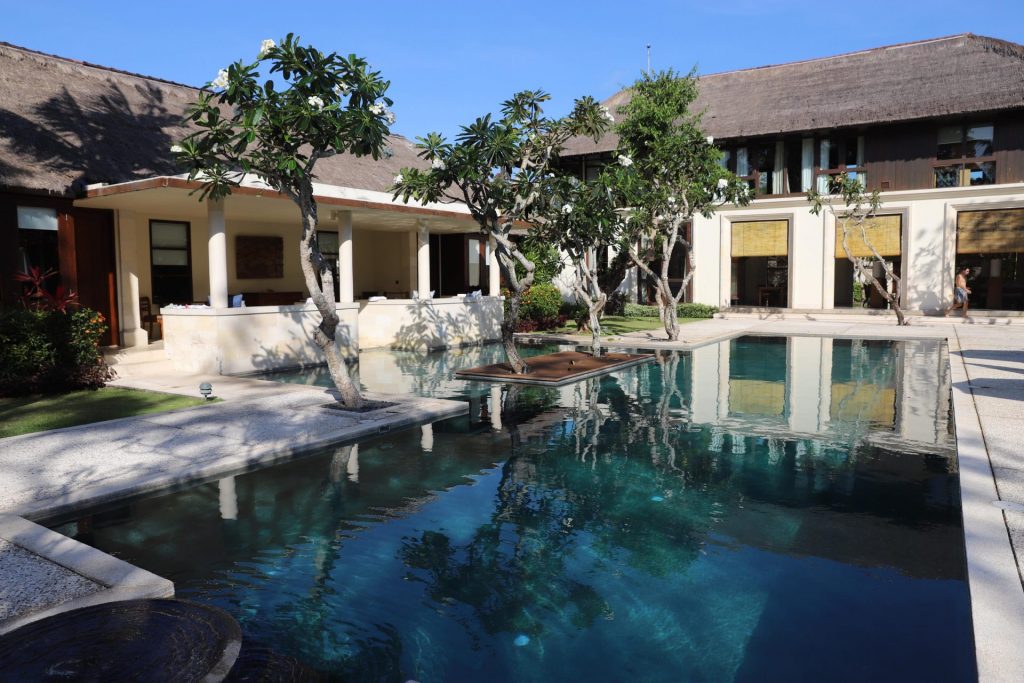 Only downside I would say is that the residences are along the beach across a small road, it is not a busy one but still one of the bedroom was pretty noisy. We really enjoyed the backdoor to the beach though! 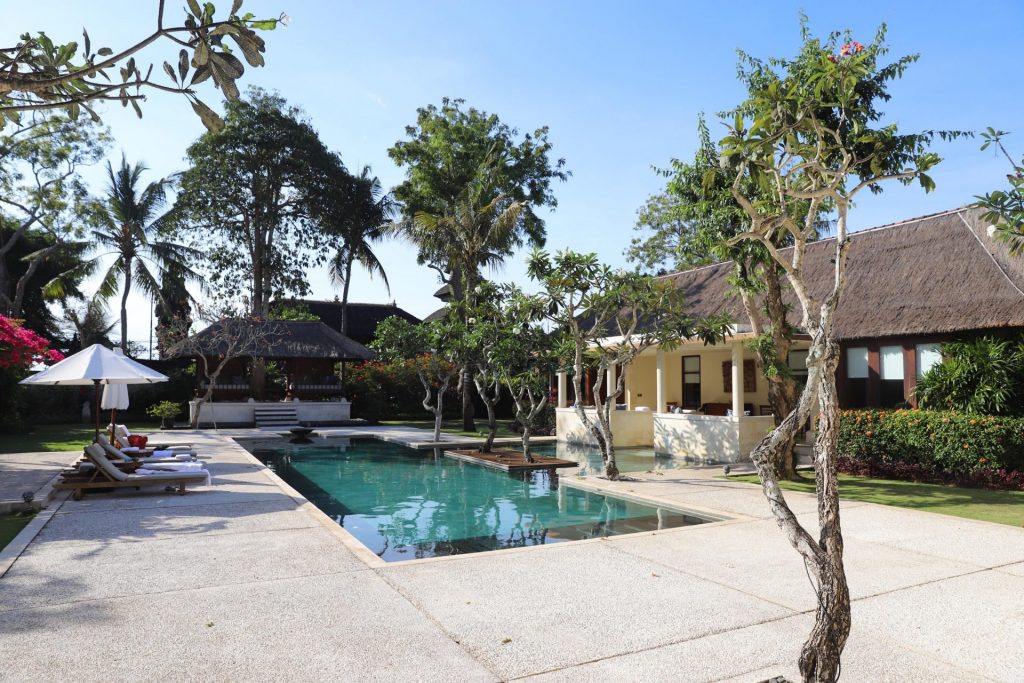 The residence comes with a 24/7 butler, ours PJ was the best. Awesome with kids, awesome at arranging stuffs, he would come with cookies decorating kits at snack time, would take the kids to the hotel for ice cream, got them extra coloring books, fishes in the pond got fed 10 times a day, he was really awesome. Apparently he normally caters for the two presidential suites so he clearly had an idea of top notch service!

The infinity pool on the beach is pretty impressive (swimmers in our family estimated it around 80m long!!!!), there is another one “higher” (the hotel is built on a cliff) in the hotel with a stunning view from above and an adult one. 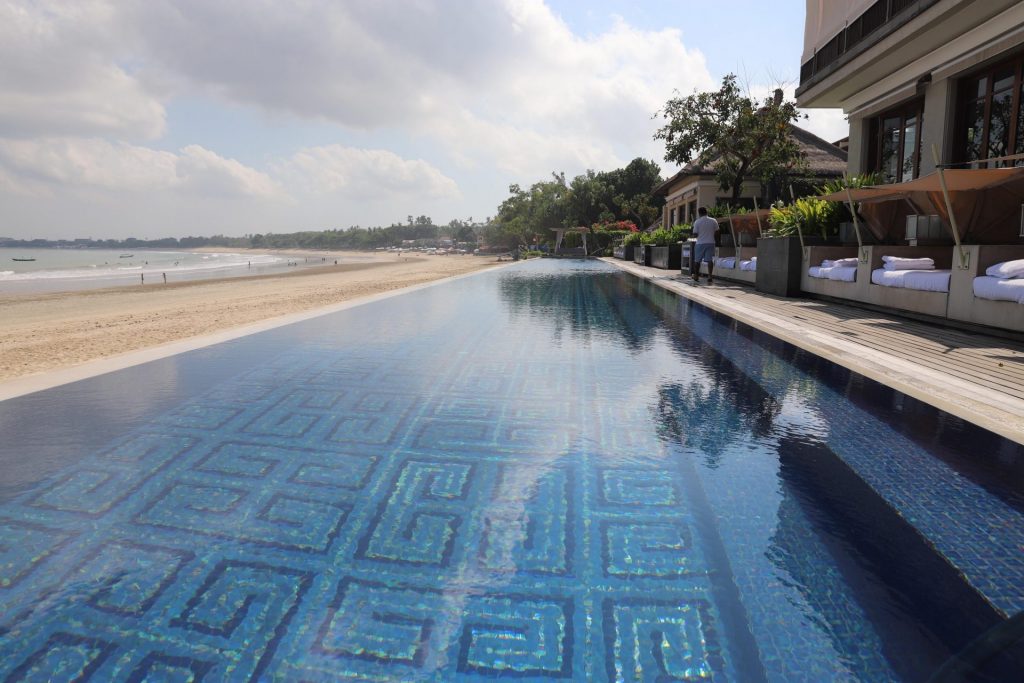 We did not try the gym

The spa is under renovation until Easter 2020 so they do the treatment in one of the residences, the therapist and treatment were really good but I did not get the spa experience which I’m sure is gonna be stunning

How was the beach?

The beach is really nice and clean, which I’ve been told is not the case in many parts of Bali nowadays. I must say that the idea of the stay was for my kids (8 & 6) to surf. We debated quite a while on where to settle in Bali for that and were recommended Jimbaran as waves are usually smaller and the recommendation was perfect for us. 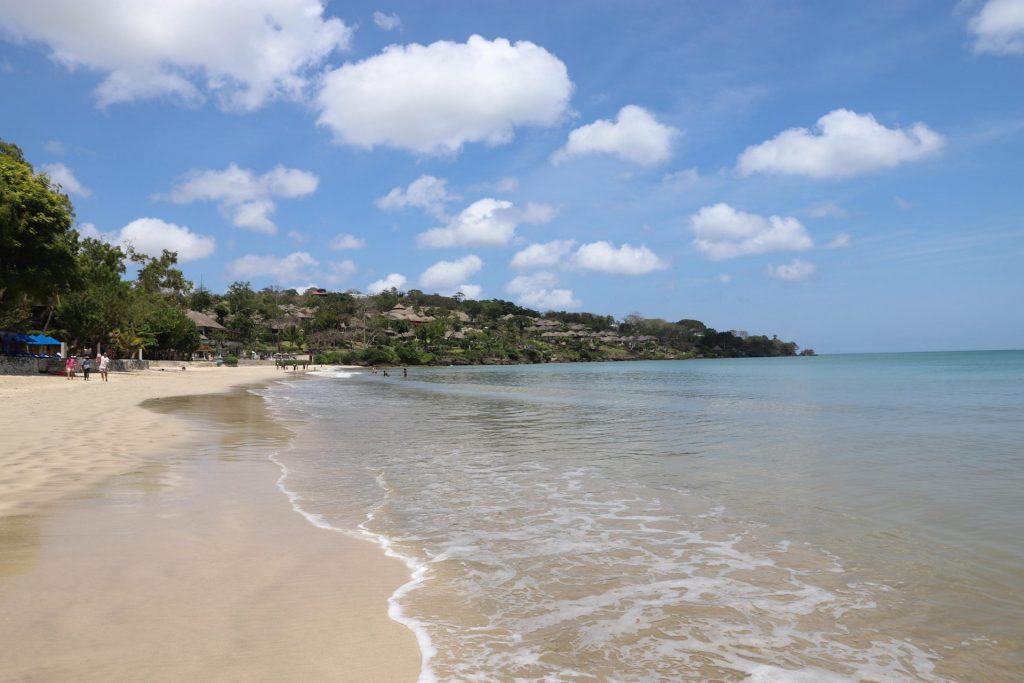 Four Seasons is secluded on one side of Jimbaran, day time is quite quiet, at sunset this beach gets MUCH busier with local kids and vendors, definitely not the deserted beach type but very nice atmosphere. 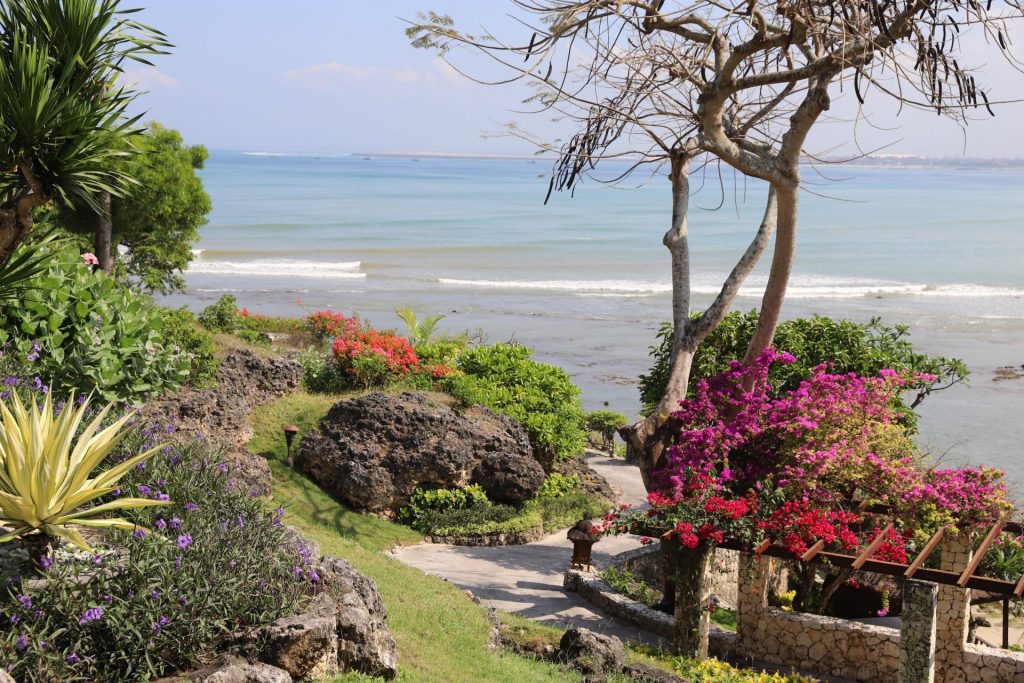 How was the Kids Club?

There is, with surf camp and grand parents we did not use it. Probably nice for very young kids as there is a shaded paddling pool and it s next to the main one so easy access in and out, a small sand pit with baby slide but to be honest I think older kids would be pretty bored as it s quite small. Always good to have the option though!

How was the food at the hotel/restaurant options?

The hotel has 3 restaurants, a Balinese one with very limited seating / more private kitchen type, we weren’t amazed but I don t find Balinese food amazing anyway ☺, a fancy tapas one, the Sundara that we absolutely LOVED and a buffet style one which was delicious as well. 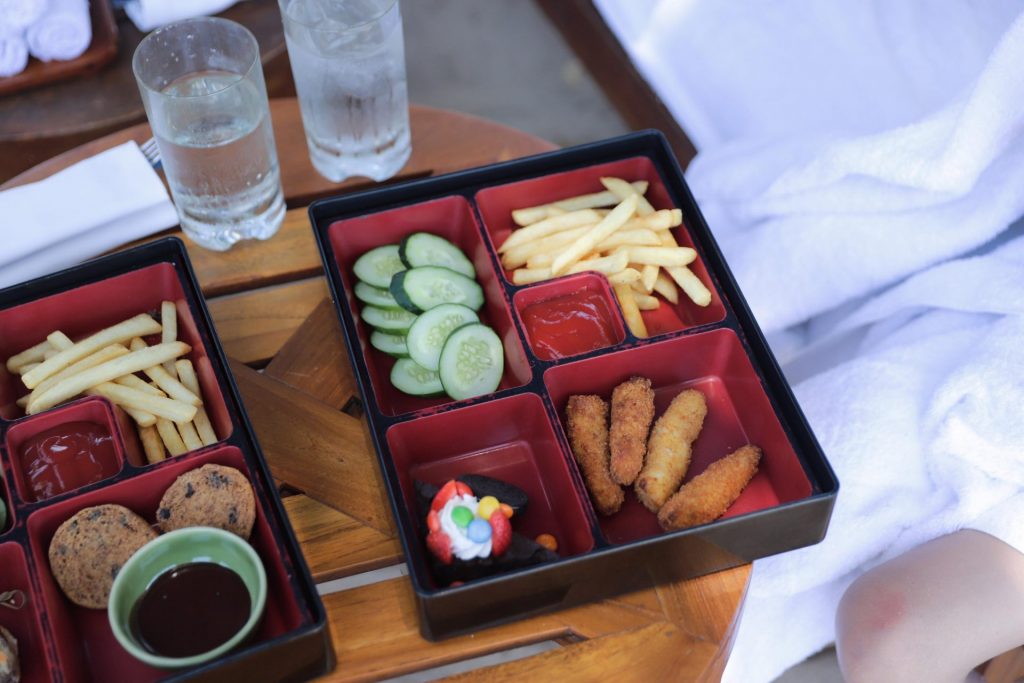 10 years ago we really enjoyed the Warungs on the beach… found them disappointing this year, extremely touristy and the nasi goreng was not even good!

The Intercon is next door thru the beach, their Tepanyaki is really good and a whole show from the cook, great option… their Italian was also really good with outdoor dining in the gardens. We have not tried the steakhouse / grill on the beach but looked nice as well.

Did you do any excursions?

So Bali = BAAAAAAAAAD traffic… so I would recommend anyone who is keen on visiting to actually change hotels. We were quoted 3.5h each way for Ubud and 1.5h for Uluwatu at sunset so no we did not leave the hotel except for a day at the waterpark, Waterbom, that I would highly recommend! Plenty of rides for all ages, great food, nice set up, the kids absolutely loved it

What tips would you have for someone planning the same holiday?

So we went there for surfing… Four Seasons do have a surf school runs by tropic surf. When I enquired about prices I nearly choked, as they charged about 120usd per hour per person, up to 4 ppl per group, which meant in our case nearly 500usd per hour to surf in Bali… argument being they have top safety and equipment, well my kids might be the next Kelly slater but far from it now so I thought I could have a look around and check more standard equipment! 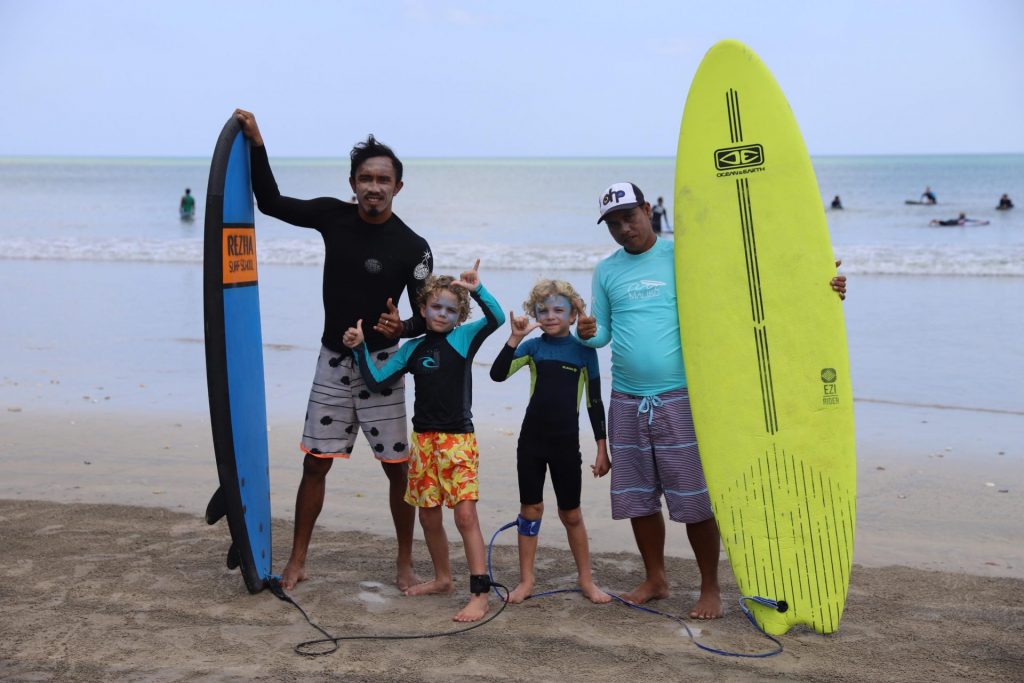 Once you are on site, they are surfschools literally on the beach 20m down where you can negotiate group, private, board only.

I had search ahead and called 2-3 school and ended up contacting Edo at Malibu surf Bali. If you go with kids, call Edo, you won’t be disappointed. First two kids, 6 and 8, he said we only do private for safety reason, about 25 usd for 1.5h, they gave us a rate for the week and we got a free surf photo session by Edo girlfriend at the end of the week. He and Hamza were awesome with the two kids, one could already surf, the other not, by the end he was going crazy in big waves. We would totally book them again if we were to go back, we felt really safe for the kids and they had a blast. Only regret was for my husband not booking an instructor for himself. They do move from beach to beach around so can teach elsewhere or take you if surf conditions on site are not good. 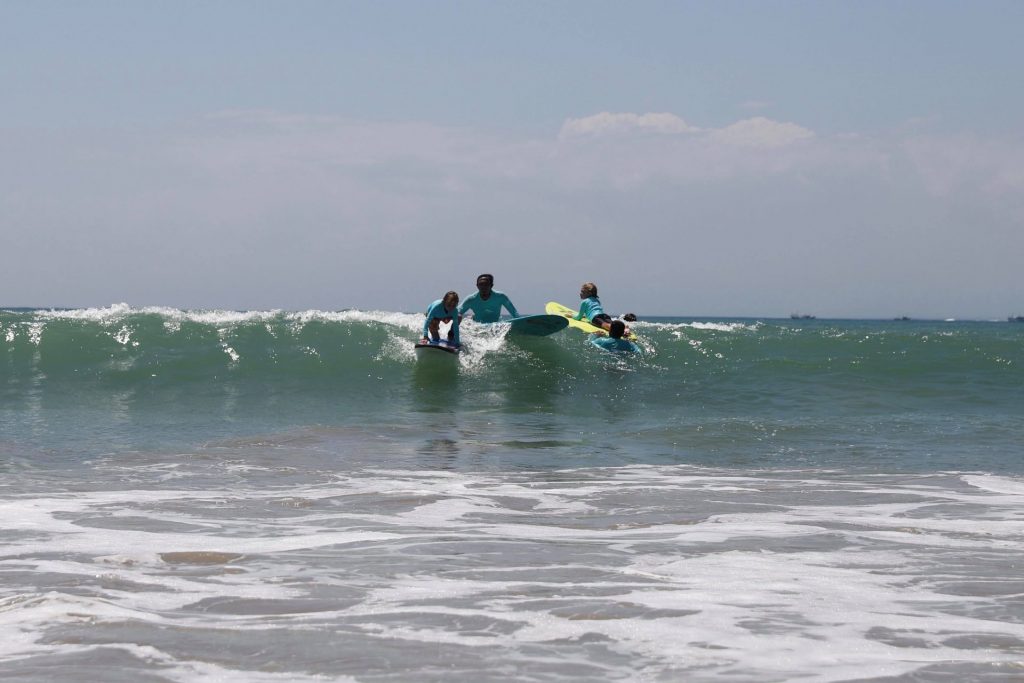 The kids are asking when… and yes probably! Mommy between beach & spa, kids surfing all day dead by 7pm… sounds like a good reason to return!