When I think of Nha Trang, my mind harks back to my backpacker days and the infamous Nha Trang party boat (hands up if you’ve been).  15 years on, I am now the author of a family travel blog where we like to focus on the more luxurious end of the travel spectrum. So today I bring you a review of the Evason Ana Mandara, Nha Trang’s only beachfront resort and part of the uber luxurious Six Senses Group.  Reporting for me is Helen, author of Hong Kong’s popular guide to all things food, Mango Menus. 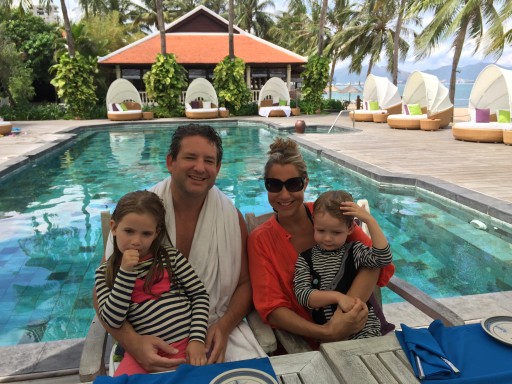 My husband and I took our two children aged 4 and 3. I am also 6 months pregnant to add to the baggage…

Where did you go?

We flew from Hong Kong to Ho Chi Minh to stay with friends in their home for a long weekend, before taking a domestic flight from there to Nha Trang for a week in the beach resort: Evason Ana Mandara.

When did you go?

Against all the odds, we went at the end of the September. We wanted to take a last minute holiday before my husband started a new job and since our kids are still young enough to be taken out of school, we seized the opportunity. All the guide books warned that the monsoon season would begin then but our hotel disagreed, saying it was closer to November for the heavy rain. The weather was spectacular. Hot and sunny for the majority of the time with around three short rainfalls towards the end of the trip.

How did you book the trip?

We booked all parts of the trip separately online.

What did the price include?

The hotel price included breakfast. Since it was low season, it was significantly cheaper than usual and we would therefore highly recommend travelling at this time. The two public holidays in Hong Kong also meant that you only needed to take off 3 days from work to get a 10 day holiday!

The hotel told us that Christmas is their busiest time of year, since most of their guests are German who like to come when Europe is coldest. However they are soon to introduce a charter flight from Shanghai to Nha Trang which may affect the clientele and pricing.

Did you have to organize visa in advance?

We are British and therefore no longer require visas to enter Vietnam. However this is not the case if your passport has less than 6 months left until expiry, as in the case of my daughter. We therefore had to arrange a visa for her.

How was the flight?

The flights from Hong Kong were short so bearable with small children. One way to entertain my daughter on the way back was to purchase her a Vietnamese dress in the same style as the air hostesses. This gained her a lot of attention and selfies with the airline staff! 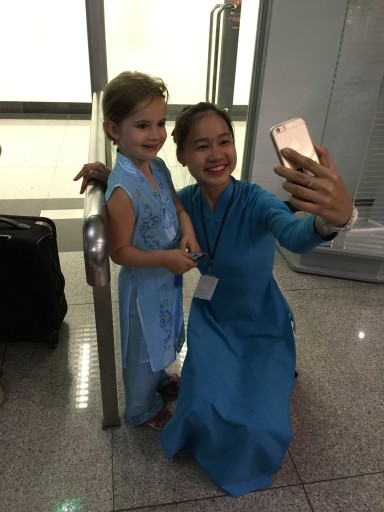 How far was the hotel from the airport?

The Evason Ana Mandara is around 40 minutes from the airport and we were picked up in a small minibus for which we paid 25USD each way.

What did you think of the hotel?

Overall we were very impressed with the hotel, and delighted to find it fairly empty in low season. It’s a well appointed 5 star hotel with a boutiquey feel, and listed in the Mr and Mrs Smith directory, with which we feel you can rarely go wrong. 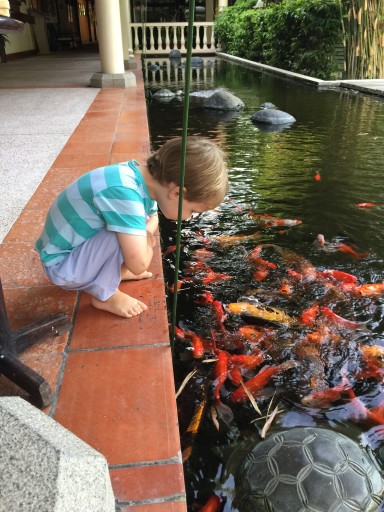 There are around 70 rooms, all at ground level in a garden environment on the beach.

My only criticism would be its positioning on the main road. While 90% of the time we did not think about it as our room and the beach were too far away, there were parts of the resort, such as the walk to the spa, where we could both see and hear the traffic. This slightly detracted from the holiday peace we were seeking. While we realize the hotel can’t change its location or get rid of the road, they could perhaps at least grow tall trees to shut out the view of it.

How was your room?  What baby/kid amenities had been provided?

We chose the largest room possible, directly on the beach. This was room 322 which we highly recommend.

The bathroom was large and included an outdoor shower as well as large bath tub and indoor shower. We were welcomed with a large basket of fresh fruit, homemade chocolate and animal shaped cookies for the children.

We had a very large king bed where we slept with my 4 year old daughter while my 3 year son slept on a campbed at the end. I wouldn’t say those positions were exactly static over the night however!

How were the facilities?

The facilities were excellent. There were two pools, one was a larger infinity one while both were adjacent to the beach. There was also a tennis court and Sixth Senses Spa. The hotel organized one free activity per day including volleyball, head massage, Frisbee and badminton.

Was there kids club?

There was a kids’ club to which we had recourse from time to time, perhaps an hour or so per day. This was our very first experience of staying in a hotel with a kids’ club so we have little to compare it to but were thoroughly impressed. It was a small building next to the infinity pool with a gated garden which you were asked to book in advance, but this wasn’t necessary in low season as there were only around 6 kids staying at the hotel. Activities ranged from baking cookies in the hotel restaurant, making helicopters from coconut palm leaves, sand art and clay modeling. The staff in charge was very attentive and motherly towards our children who instantly felt at home with them. While we had the option of leaving our kids there with the staff, our three year old objected to this so we stayed with them most of the time. 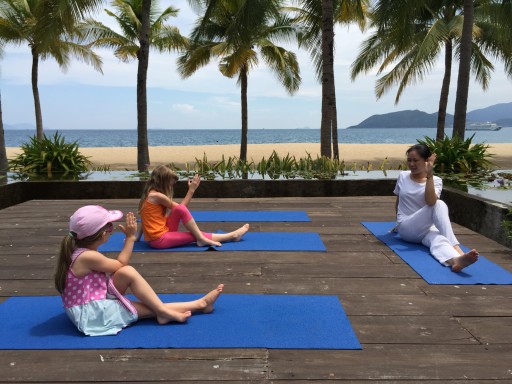 As well as the kids’ club, there was one free activity organized per day for kids or adults. The kids did yoga one morning for example and another day, they enjoyed their first ever foot massage. To what are we accustoming them?! 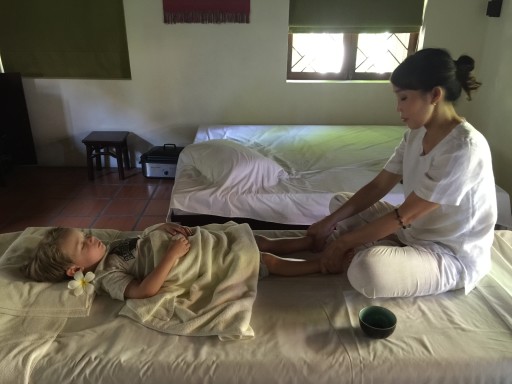 Was there a beach?
The hotel was situated on Nha Trang beach which is clean and calmer than other Vietnamese beaches e.g. Danang. It was fairly busy but the hotel’s section felt a little more exclusive. It must be really quite crowded in high season. One thing we learnt is that the Vietnamese love to frequent the beach early in the morning! The first morning I awoke at 5.30am and ventured outside to look at the sunrise, only to find the beach heaving with people! I thought my watch was wrong… 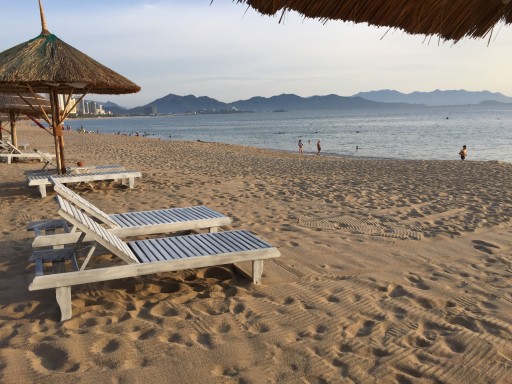 Did you do any trips/excursions?

Apart from our previous weekend in Ho Chi Minh, we didn’t venture from the hotel very much. Like the rest of Vietnam, there are a lot of crazy motorbike drivers so walking around with small children is not terribly relaxing. There were trips organized by the hotel however including dives and market tours.

How was the food?  Any recommendations?

The hotel breakfast was spectacular including a very large assortment of fresh exotic fruits, homemade jams and breads (including diabetic and gluten-free varieties), juices, cooked food and more. The pool snack bar was also top notch, where we enjoyed chicken tacos and fresh coconuts most days. There were a couple of evenings where the hotel put on a buffet, one time of typical Vietnamese street food and the other was a barbecue. We would recommend both, and even more so given the entertainment provided of local music and a lion dance which the kids loved. The room service was also good. However, it was the fine dining menu in the main restaurant which let the side down. Both the menu and wine list seemed poorly constructed and we struggled to find anything we even wanted to order. And when we did it was disappointing. We tried the local scallops on recommendation from the hotel but found them to taste old, and the combination of ingredients in each dish seemed a little random rather than complimentary.

There is also the Ana Beach House restaurant, adjacent to the infinity pool and overlooking the beach. This is apparently one of the hotspots for party revelers to begin their evening before hitting the bright lights of Nha Trang. However, with two kids in tow, we didn’t fit into this category sadly!  Instead we did enjoy many a sundowner on its terrace, although being pregnant, mine were more of the mocktail variety. 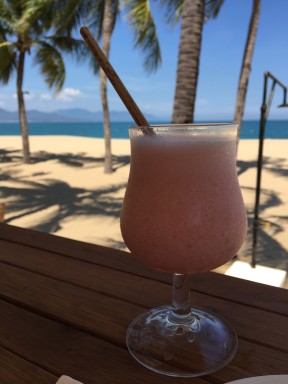 The restaurant also serves light bites, lunch and supper, of which we enjoyed the mezze plate most with its excellent babaghanoush and artichokes. While the menu is Mediterranean on the whole, there is always the trusty pho and Vietnamese spring rolls. 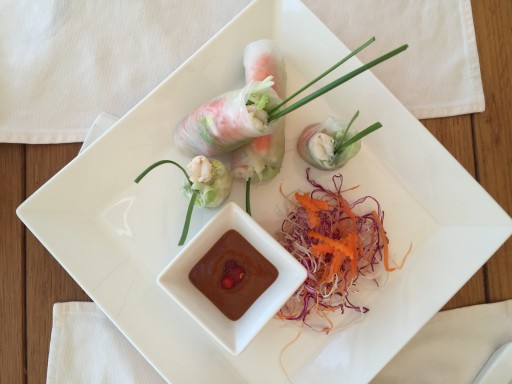 They also serve an extensive kids’ menu here, as in all the restaurants at the hotel, whose fun puzzle style menu  is the perfect way to keep the kids entertained before the food arrives. A range of homemade ice-creams is also an ideal way to end a meal here for both the children and adults. 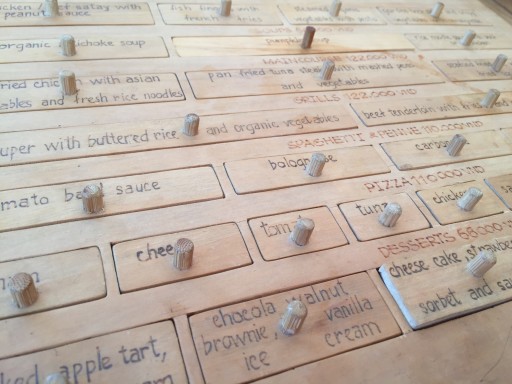 We explored other night time dining options including the Intercontinental in Nha Trang. This had a large reliable menu, but nothing stood out particularly. A couple of singers circling the restaurant serenading each table made the night however.

Food is a big part of our lives and holidays and while we had been previously overwhelmed with the quality of local food on a trip to Hoi An earlier in the year, this trip didn’t surpass that unfortunately.

Our most memorable meal was at the Park Hyatt Saigon, on our return journey home. The deep fried rice ball containing perfectly cooked scallops with peppercorns and bell peppers will take a long time to fade from our memories – hopefully never!

How was the staff?

The staff was most amenable, polite and charming. They were especially tolerant and friendly to our young children.

How was the trip overall?  What tips would you give to someone booking this holiday?

It was a spectacular trip mainly due to the ability of the hotel to strike the right balance in providing sufficient diversion for our children while  maintaining the high standards of a 5 star. The combination of good weather, low occupancy/ season (and corresponding low prices) also made us feel we had picked a real winner.

Would you go back?

I think life is too short and the world too large to go back to the same place. I would certainly recommend it to others searching for a beach resort in Vietnam however, and given the high standard, I would not hesitate to stay in another Evason hotel, of which there are a few elsewhere including Thailand and Oman. 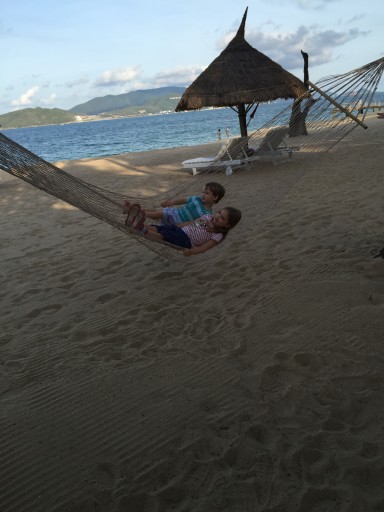