" /> Flying With A Baby On Air New Zealand - Jetlag & Mayhem

It was such a shame when Air New Zealand stopped flying from Hong Kong to London.  Not only were they the cheapest, their seats (Econ, Premium & Business) were all far comfier than competitors and the food outstanding.

However, we do have a longhaul Air New Zealand review today courtesy of my high-flying friend Rhiannon (a qualified pilot nonetheless) and the equally high-flying baby Madeleine, 3 months old. 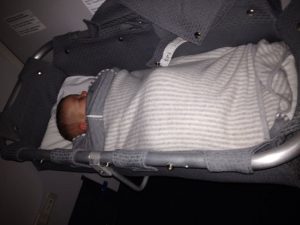 What flight were you on?

How did you book the flight?

Were you able to prebook a bassinet seat and/or bassinet?

Yes, for NZ$25 each way you can prebook your bassinet and it is guaranteed. If you don’t wish to pay the NZ$25, you can chance it on the day. To me, spending that extra amount was a no brainer.

Do you belong to your airline’s loyalty scheme and did this give you any extra benefits?

I belong to the Koru Club, which gave me extra benefits. I used the call centre so that I could book in economy but then discuss with the staff which days I could guarantee an upgrade to premium economy using airpoints. The immediate confirmation of an airpoints upgrade is only available to gold elite frequent fliers (their top class) and subject to availability. Although I may still have got an upgrade by the time I checked in, I changed the dates I was flying to guarantee the upgrade at the time of booking. I then booked the bassinet in this class too and paid for it all at the same time.

How was check in?

There was no queue and check-in straight forward – I checked in at Wellington and took a domestic flight to Auckland first. I checked my main bag straight through to Hong Kong but checked the buggy just to Auckland so that I could use it during the stop over. I then checked it at the gate in Auckland.

How was security? Did they make you taste the milk/water/baby food?

Very fast – again no need for a priority queue or to taste anything. I added some water to her bottle in the lounge and was carrying some powdered formula but she is 95% breastfed so it was only for back up.

What did you think of the airport’s changing facilities and feeding rooms?

I changed her in the koru (frequent flyer) lounge – just a pretty regular pull down change table in the disabled toilet.

Did you get priority boarding?

I did, but just as a part of being premium economy. I think that families do get priority boarding – they certainly board by seat number – but I missed the calls as I turned up at the gate and walked on.

What did you think of the seat?

The seat was fine – the premium economy seats are a bit bigger (I think?) and have a leg rest, and there is definitely more leg room. Air NZ also prides itself that the food is a lot more like business class than economy class. 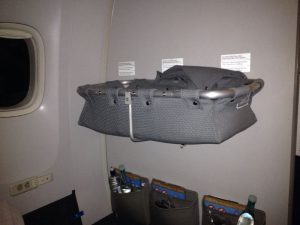 The bassinet was clean with a PVC covered mattress and a sheet on top. It’s pretty small tough – Madeleine is only 3 months – although quite long for her age – and while she fitted fine, I am not sure how much bigger you could be? 6 months max, perhaps? I think it said 70cm and 11.8kg maximum.

The Air NZ staff were very friendly and helpful.

Did you feed on take off and landing?

Yes – both ways. It wasn’t 100% by design – I wasn’t going to force the issue if she wasn’t interested – but on both occasions the timings worked well and obviously that helps with air pressure.

Did Madeleine sleep well on the plane and behave?

Yes – she had been up awake for almost all the time up to the midnight flight so after the feed for take off she passed out and slept for almost 6 hours. She then woke, fed, went back to sleep for an hour, then woke, fed, played, and had a short sleep in my arms before the landing feed.

What are your top tips for flying with a baby?

Subscribe to Jetlag & Mayhem!! Seriously though, as a good friend of Nic’s, I have subsribed to J&M since day one (I was even at its ‘launch party’) and have read almost every post since. It has made me confident that flying with a baby, even by oneself, can be done without too much drama but especially with a bit of pre planning. 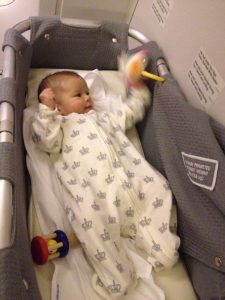 I had an arsenal of gear with me – a range of little toys (the best being the favourite toy off her playgym), multiple changes of clothes for her, a change of top for me (prompted by the J&M hand luggage packing list), a dummy (even though she doesn’t use one), powdered formula and a bottle with water I filled at the lounge (even though I never personally give her a bottle – someone else always does it), spare muslins etc etc. The favourite thing would be the baby cashmere blanket that I got from M&S online and delivered to NZ for £30 (half price on sale) but I would have happily paid full price for it given it’s so soft, warm and lightweight.

I took a bjorn baby carrier which I think is super useful – especially as I was travelling by myself so I couldn’t have carried my hand luggage without the free hands.

But overall, Madeleine is still very young, so not too fussy about where she sleeps, is generally very cruisy, and I tried to approach things in a relaxed (if hyper organised) way so that she wouldn’t pick up any stressed vibes from me.

Where did you pick up the stroller?

At the gate – although I was lucky to given a little confusion. I asked at the gate in Auckland whether it would be at the gate or carousel in HK – they said gate. As I got off, I asked again, and the HK airport staff member right outside the aircraft door said the carousel. As I got to the end of the air bridge, I recognised a father (who was travelling by himself with his 1 year old daughter) who had boarded right ahead of me waiting for his stroller and asked him. He said he had done this before and it was always at the gate. So I waited there and my stroller was delivered within a couple of minutes.

Did you get any help in immigration e.g. faster queueing?

I asked the lady guarding the priority/courtesy queue if I could join it and was allowed in.