My sister visited Thailand for two weeks over Easter break. The lucky duck decided to make her trip all the more special by flying BA’s Club World from London Heathrow to Bangkok.

We don’t often fly long haul, and we decided to splurge and treat ourselves to Business Class flights for our two-week trip to Thailand with our 4 year old and 6 year old. We reasoned that it would be nice to actually get excited at the prospect of the flight, rather than simply dreading it for weeks in advance. 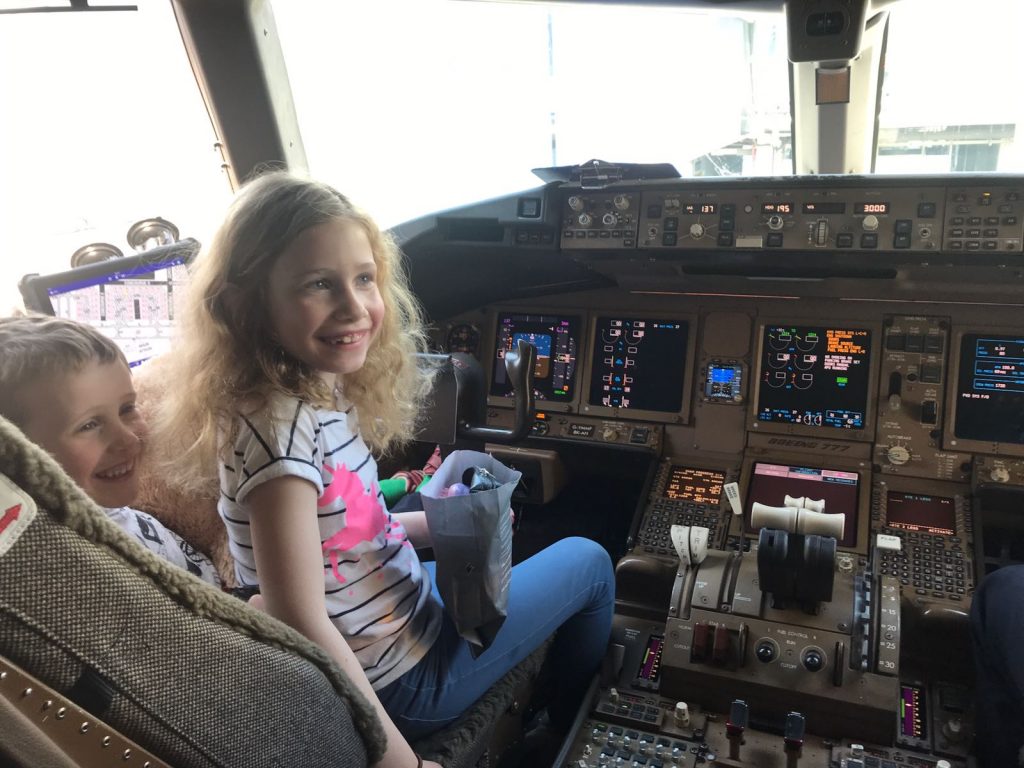 We booked the flights direct via the BA website. The booking process was simple, but I was irritated to discover that even in business class you are still encouraged to pay extra to select your seats in advance. In any case, we did opt to fork out the extra to ensure that we had the seats that we wanted.

At Heathrow we were able to use the dedicated Club World check-in area. It doesn’t feel particularly special, but it was a little more peaceful and there were no queues. We were then able to use the fast track lane to get straight through security. 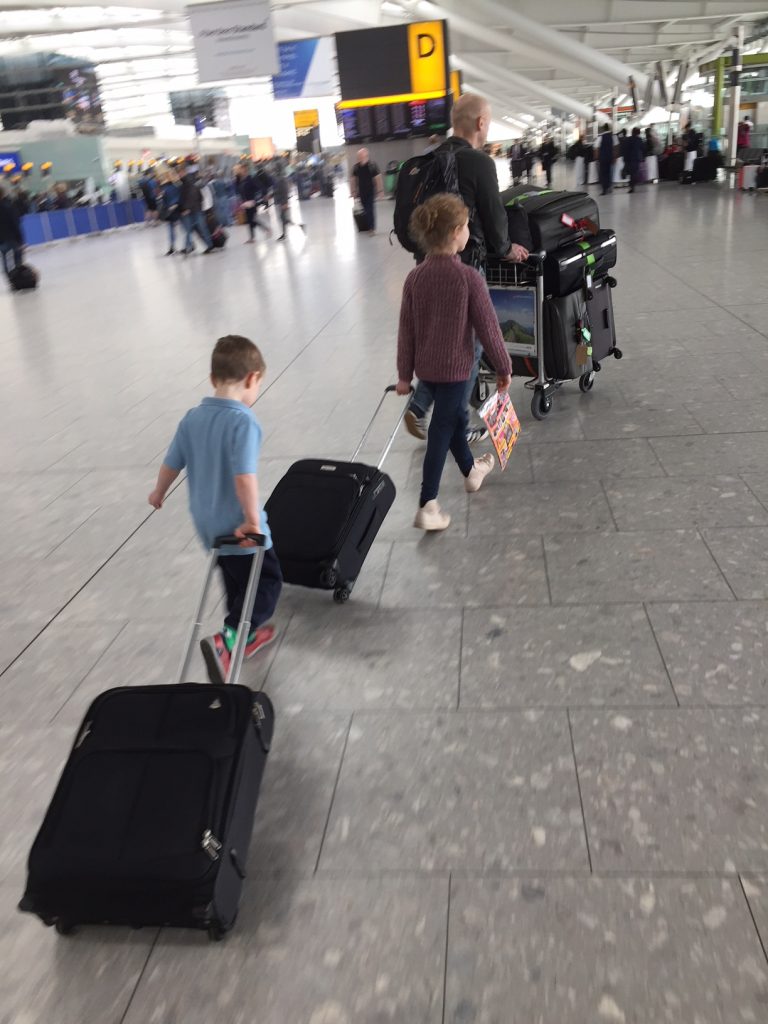 Once through security, we headed for the lounge. Although the lounge appears to be directly next to the security check, we still had to take a circuitous route through the shops and restaurants to enter it. There are two lounges at Terminal 5 and we were directed to the larger one, but they are both very similar. If you’re feeling nostalgic for the glamour of jetset travel, then I certainly wouldn’t head here for your fix of luxury. The Club lounge was large but very overcrowded and messy, and we struggled to find somewhere to sit. It’s useful to have a coffee and use the free wifi, but that’s about it. There’s a small kids area, which is really just a corner with a couple of computer terminals.
From the departure gate we boarded a bus to get to the plane itself.

We were checked in pretty quickly and we were able to use the priority security lane. Once through into departures we were given access to the Cathay Lounge to wait for our flight, as BA doesn’t have a dedicated lounge at BKK aiport. The lounge was nice and calm with plenty of seating.

Our flight was on a British Airways Boeing 777-200. The Club World cabin has a configuration of 2-4-2 and the seats alternate so that the aisle seats are facing forwards and the window/middle seats are facing rearwards. The cabin was split into two sections, and we were sat in the front row of the second section (row 10), in the four middle seats. My husband and I each had aisle seats facing forwards, and our kids were between us, facing rearwards. 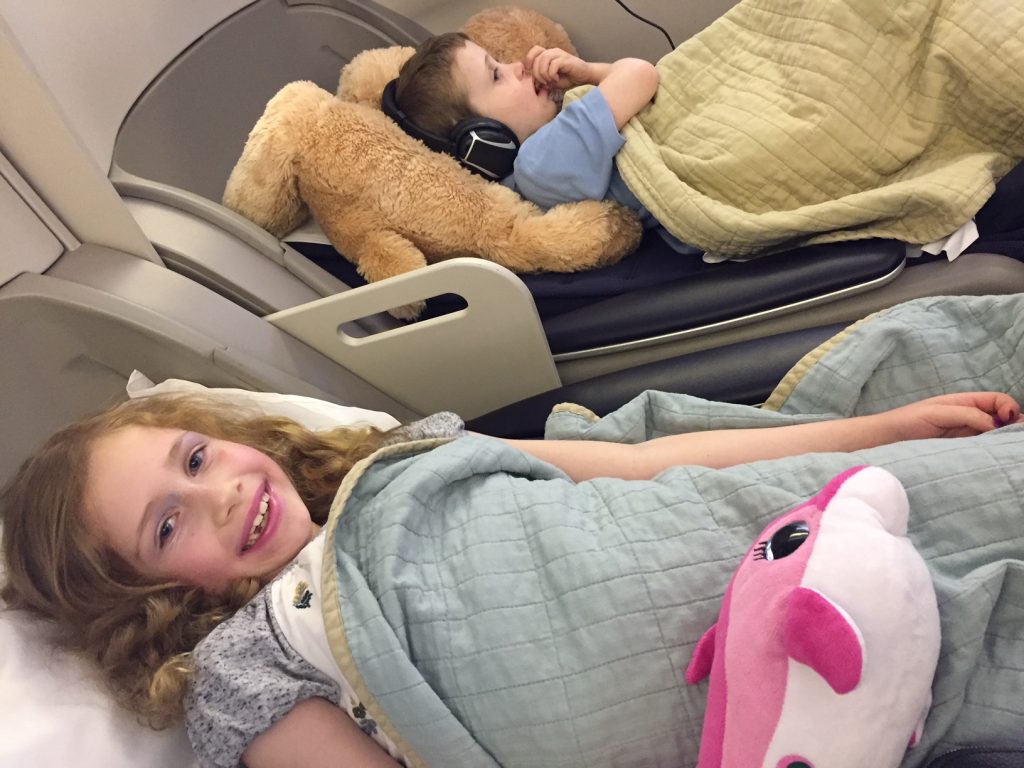 As we were in the front row (there was a galley directly in front of us) my husband and I didn’t have anyone climbing over us to access the aisle. However, our children needed to climb over the legs of other passengers in order to get to the aisle. This would have been a bit tricky when these passengers were stretched out asleep, so we mostly lifted the kids over the seat dividers instead. 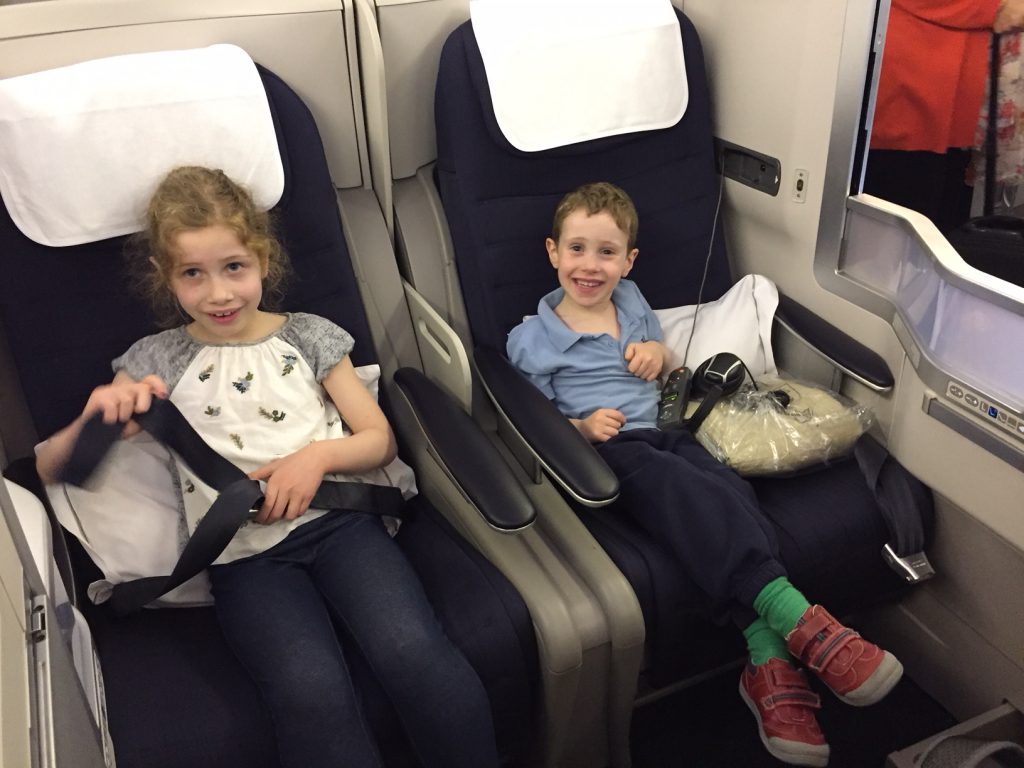 The seats were the star of the show. I haven’t spent much time in business class, so I do get incredibly excited at the prospect of a flat bed on an aeroplane. We were given a comfy blanket and pillow and an amenity kit with White Company branded supplies. The seat has various different recliner options and a large footrest, which joins up to make it into a flat bed. I found it very comfortable. There is ample room in the overhead lockers and a small pull-out drawer below the footrest.

This is where British Airways just does not compare with its more glamourous peers. The crew were delightful but they felt overstretched throughout the flight. On our outbound flight I pressed the call button on several occasions and no-one came at all, and they totally forgot to serve me one of my meals.

The food and drink

This made me really sad, as I actually love airline food! On both legs of our journey I was served inedible beef (that’s once they had actually remembered to serve me). I had pre-ordered a kids meal for both of our children. This was fine on the outbound journey (chicken nuggets) but appalling on the return journey. They were served some kind of unidentifiable sandwich filling and none of the crew could tell me what it was. There was a selection of snacks available in the galley (the ‘Club World kitchen’) but on the return journey they ran out of snacks, which was pretty unhelpful once my kids rejected their revolting looking sandwich but then complained that they were hungry. I don’t want to sound like a total whinger, but this aspect really did not feel like a ‘Business Class’ experience at all.

I’m pretty easily pleased when it comes to in-flight entertainment, as it’s just such a treat to sit back and watch a film. That said, the BA entertainment system really didn’t feel like it had much of an exciting offering. My husband has recently flown Virgin Upper Class and said that their entertainment was miles better. In any case, I had downloaded plenty of kids TV onto Netflix so our kids were happy to lie back and binge-watch Blaze and the Monster Machines. 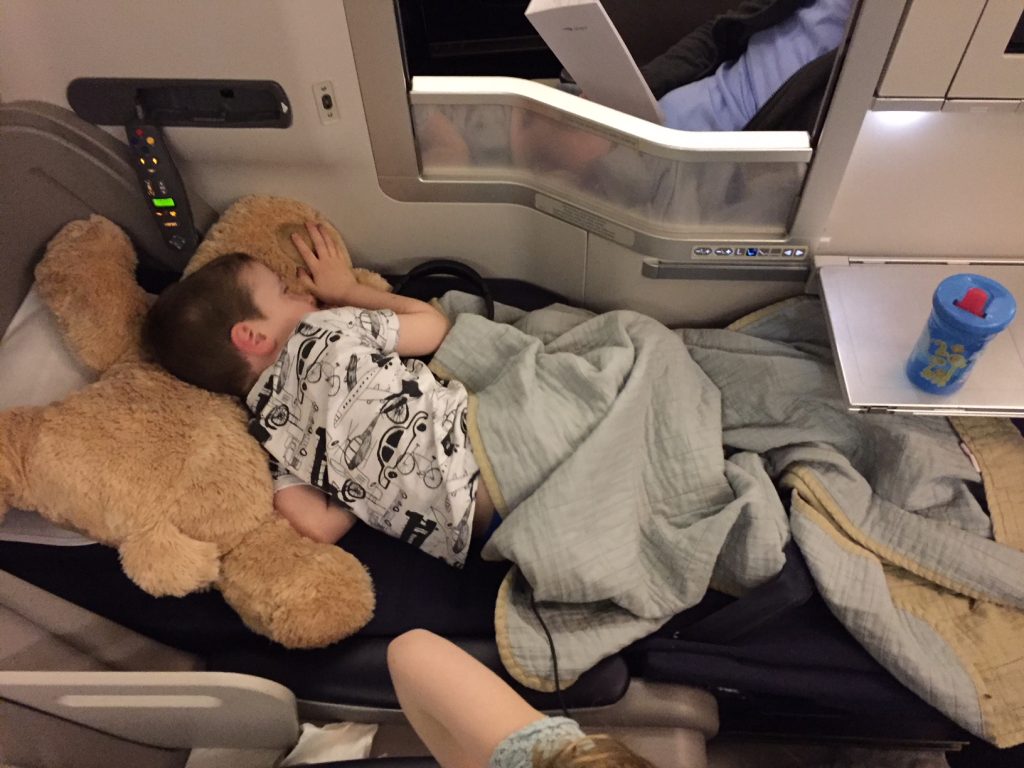 Is Club World worth the extra money?

It’s a huge treat to turn left when you get onto the plane. Instead of dreading the flight, I positively looked forward to it, and I enjoyed the ease of the check-in and departure lounge. The crew were lovely, and even arranged for our children to meet the pilot once we had landed. The flat bed was fabulous, and we were all very comfortable throughout the flight. However, the lounge at Heathrow felt tatty and crowded. The plane looked tired, and the crew were very busy and seemed understaffed. The quality of the food was terrible. I wouldn’t rush back.