I’ve been pestering my friend Rachael for this review for some time. Let’s face it, who doesn’t want to go to Lapland..  Rachael took her trip to the next level and turned it into a week long epic adventure.  I’m sure you’ll be inspired by her Finland review, husky sledding has long been on my bucket list.  You’ll also marvel at the temperatures edging towards minus 30 (no mean feat for Rachael and family given they live in sunny Singapore).  Over to you Rachael…. 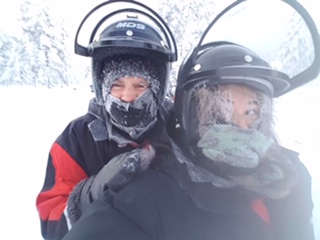 Sometimes I have these ideas.  And I have a vision of how it will turn out.  And then when I’m in the middle of it, kids are melting down, all my plans are falling apart, nothing is following my vision, I think “Which idiot came up with this idea?”.  And as we taxied towards our take off on our Finnair flight from Singapore to Helsinki, from 30 degrees to minus 30 degrees, with two kids (9 and 5) and five suitcases packed with every piece of warm clothing I could find in Singapore and Christmas sacks full of toys, I had the (Hel)sinking feeling that this might turn out to be one of those ideas.  But this was actually the best family holiday we have ever done.

We were only in Helsinki for 12 hours.  Our flight arrived early AM and we were catching the night train to Rovaniemi.  So I booked a day room at the Hotel Glo.  They were so helpful, letting us stay longer than the 12 hours we had booked and letting us store the suitcase full of Christmas toys until we returned from Rovaniemi.  They were pretty representative of our experience in Helsinki – charming, friendly, helpful.  We wandered the streets, checked out the Christmas Market and got used to the cold and the snow.  We met up with our gorgeous niece Ana who joined us from London and then boarded the overnight train from Helsinki to Rovaniemi.  Probably would be more convenient to fly but in our family we have 1 train nut and 1 aviophobic so the train it was.  Again – charming and friendly, clean and remarkably jetlag-resistant, and incredibly scenic.  Mesmerising to stare out the window at what appeared to be an art-directed scene – snow topped trees, vast open spaces, the occasional wooden cabin and the even more occasional lone ice fisherman. 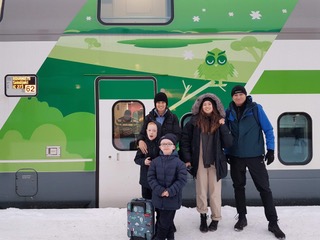 Arrived in Rovaniemi and went straight to collect our winter suits.  Despite the afore mentioned five suitcases full of clothing, none of it was up to the job.  We did several activities with Lapland Safaris and they kindly let us keep the suits for the whole time.  We returned them on our way to the station for the train back to Helsinki.  In fact, each day, as the weather grew colder, we added an extra layer underneath so by the last day we resembled the Michelin Man.  (Tip for those with kids – make sure they go to the toilet before you leave the hotel)  We had booked a car and driver who took us to Ranua Wildlife Park on our way to Levi to stay at the Golden Crown Glass Igloos.  Lots of animals you won’t usually have a chance to see at Ranua. The igloos were extraordinary, especially the restaurant but unfortunately the Northern Lights did not grace us that night.

We returned to Rovaniemi via the Lainio Snow Village.  You can stay the night in the snow hotel and it looked amazing but probably not that practical with kids. So we just marvelled at the ice structures (GOT theme) and then headed back to Rovaniemi, checking into the Hotel Scandic.

Wonderful tour arranged by Lapland Safaris.  The kids were on their own sled with an experienced sledder.  I put my life in Marcus’ hands and luckily he proved to be a proficient sledder, though I think most of the credit goes to the trainer of the dogs as they pretty much knew exactly where they were going.  The dogs were amazing, the forest was amazing.  To sum up amazing. 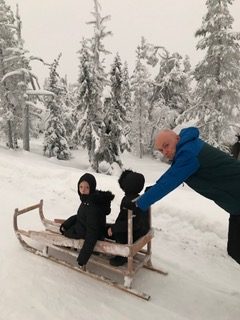 After a restorative hot beverage and lunch we headed to the nearby ski resort. There was plenty of snow but only a couple of runs.  So not for experienced skiers but perfect for our boys to try it out for the first time.  Ana tried snow boarding and Marcus tried cross country skiing. I was in charge of hat, glove and bag management. 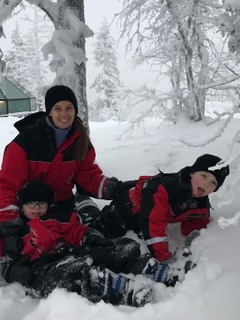 We journeyed by reindeer-pulled sled to Santa’s Village. This was a much slower journey and we probably would have enjoyed it more if it hadn’t of been so absolutely freezing. 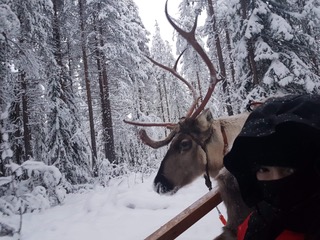 But I still give it the big thumbs up.  Visiting Santa’s Village was the original inspiration for the whole trip but it actually turned out to be our least favourite activity.  Kids loved it, of course, but there was a long queue to get about 30 seconds with a picture-perfect but fairly unfriendly Santa. Disappointingly and I guess to be expected, somewhat tacky – but if you’ve come all this way then you should definitely go. 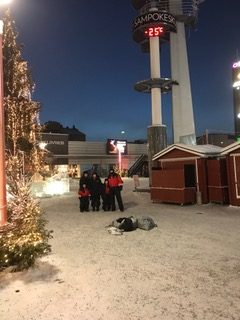 Yeah.  You read that right. Minus thirty.  And here’s the difference between minus 25 and minus thirty.  At minus thirty you cannot even move your finger to take the photo once you take your glove off so I have no photographic evidence.  But believe me it was COLD!  Too cold for the boys to go ice fishing.  And in hindsight they wouldn’t have liked it that much anyway.  Anyway Marcus and Ana were very intrepid, they snow mobiled to a frozen lake, cut a hole in the ice and even caught a fish. They loved it.  The boys and I headed back to the ski field where it was a balmy minus 25. 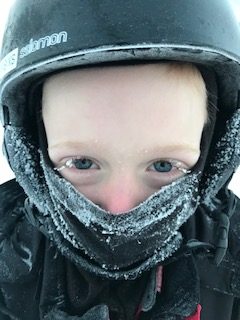 Where did you go?

Who went (ages of kids)?

When did you go and how was the weather?

We were there the week before Christmas and it was unbelievably cold.  Apparently not always that cold and it was totally manageable until it got to Minus 20.

How did you book the trip? What was included in the package?

This was a long term collaboration with the wonderful Chris at Aveson Travel.  Package included Flights, Accommodation (some meals), transfers and excursions (including clothing hire)

Did you need a visa?

No visas required for Australian citizens

How was the flight? Any tips?

My tip would be to fly first class and not be afraid of flying.  Two things I couldn’t manage.

How far was the hotel from the airport?  Did you arrange airport transfer in advance?

All the transfers were prebooked.  I think this is the best idea.  We had a couple of experiences booking taxis while we were there and it wasn’t great.

We didn’t go high end but everything was clean and functional and comfortable and above all warm.

Room and breakfast mostly.  There was a sauna at Hotel Scandic.  I didn’t try it but Ana reports very relaxing.

How was the food at the hotel/restaurant options?

Igloos – restaurant was spectacular with a modern take on Scandinavian fare.  A challenge for picky eaters and it might get a bit boring if you were there for more nights than we were.  The igloos have a mini kitchenette so if you were going longer you could definitely take your own food.

Hotel Scandic – Breakfast buffet was fairly comprehensive and there was a restaurant but the restaurants in the town were better.  Lots of options, both Scandinavian and international.

Did you do any excursions? Would you recommend them?

Did you eat outside of the hotel? Any restaurant recommendations?

We had to go to the international options cause of the kids.  Our favourite was Amarillo Mexican in Rovaniemi.

What tips would you have for someone planning the same holiday?

I would spend extra time in Levi.  You can do excursions from there as well and I think you’re more likely to see the northern lights.  I definitely would devote more resources to seeing the Northern Lights.  There seems to be a more comprehensive ski resort nearby to Levi as well.  I would see if there was some sort of private VIP tour to see Santa.  Though maybe at other times of year the queue is not so long.  There was lots of other excursions to try as well.  Ice Swimming, Snow Shoeing for example.