In the battle of the airlines, everyone has an opinion whether based on a bad experience, loyalty to an airline programme or belief in a particular brand.  I regularly fly the Hong Kong to London route which is now serviced only by Cathay Pacific, Virgin and British Airways.  As I’m a frequent flyer with all three, my decision is usually based on price with Cathay usually coming up as most expensive.  I recently booked a flight with airmiles (well my daughter’s miles but I won’t tell if you won’t) and had the chance to fly Cathay economy one way and British Airways economy on the return.  So how did they compare?

FLIGHT BOOKING
Easily done spending my Avios through the British Airways website.  As Cathay Pacific is part of OneWorld, I had the choice of Cathay on the outbound and BA for my return.

PRE FLIGHT SEAT ALLOCATION
Cathay – As I am a Marco Polo member, I was able to prebook my seat. I phoned Reservations to do this and used Seatguru as a guide when speaking to the customer services rep

British Airways – You can pay extra to prebook your seat in advance. However, I waited until the 24 hour online check-in opened and selected an aisle seat.

Winner – Cathay (but only because of my frequent flyer card)

CHECK IN EXPERIENCE
Cathay – You can check in up to 48 hours in advance of the flight. I then used the Bag Drop at Hong Kong Airport although I could have used the fantastic in-town check in.  At check in, I was told the flight was empty so even though I had prebooked an aisle seat, she helpfully moved me to an empty row.

British Airways – You can check in up to 24 hours before your flight.  They encourage you to have either checked in online or at one of the free standing kiosks before you go to a desk and drop your bag off.  I’m not sure how much this has reduced queuing time however as I still find the queues quite long. 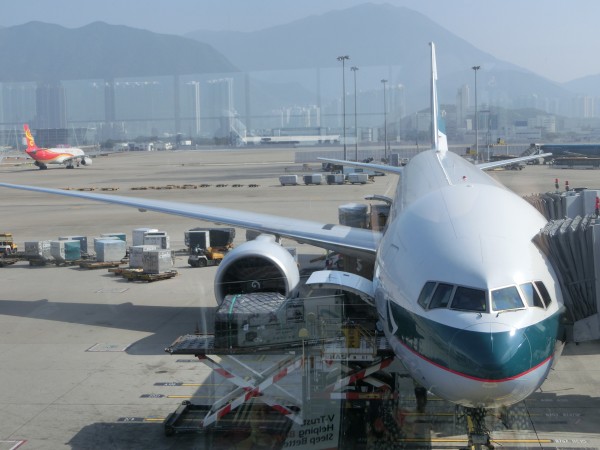 AIRPORT EXPERIENCE
The major difference between BA & Cathay on this is that Cathay flies in to Heathrow’s T3 and BA flies in T5.  Opened in 2008, T5 provides a far nicer passenger experience although I was a bit miffed to find that Accessorize had disappeared. 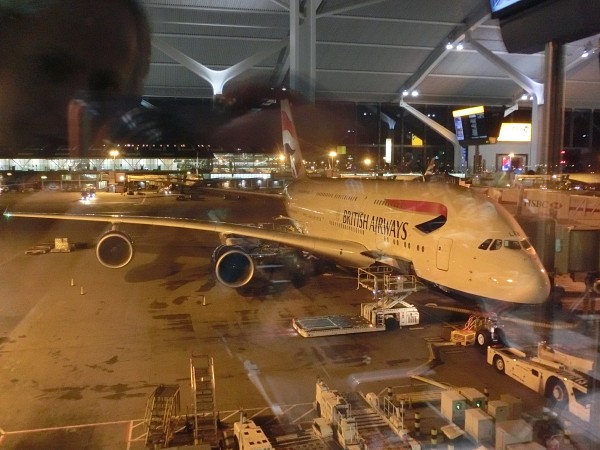 CABIN INTERIOR
Cathay’s 777-300 feels old and raggedy.  There are two economy sections with bassinets available in both.  There is plenty of storage in the overhead locker. 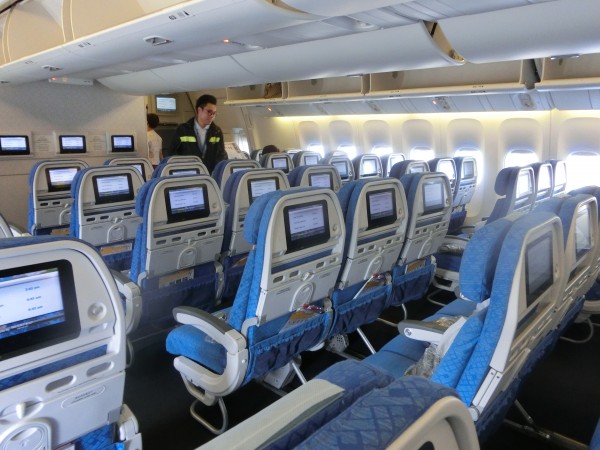 Well hello there British Airways A380!  What a lovely quiet new cabin you have with sleek lighting and clean seats. Economy, aka World Traveller, is available on both decks.  I chose the upper deck for the novelty factor of being upstairs and the feeling of a smaller cabin. Downstairs it is 3-4-3 and upstairs it is 2-4-2. 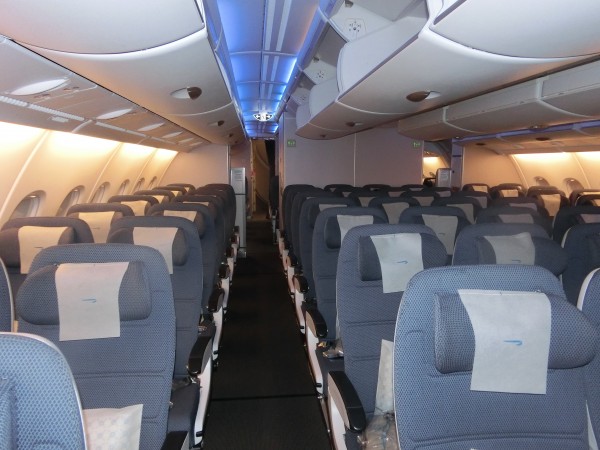 THE SEAT
Cathay – I was seated in 66C which is an aisle seat.  The seat felt old and worn.  There was a plug point beneath my seat and then a USB charging point under the tray table.  The TV was average sized. The pitch is 32 and width 18.5 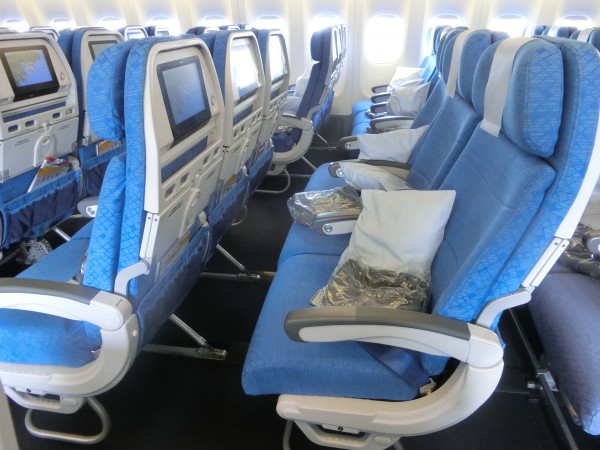 British Airways – I was seated in 73G, an aisle seat on the upper deck. The seat felt new and was very clean. There was a USB charging point on the seat.  The TV was big.  The pitch is 31 and width 17.5 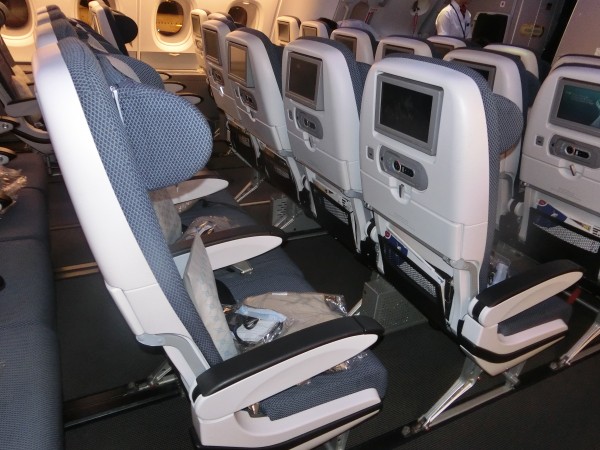 Winner – Cathay Pacific.  Although the seat was older and more worn, it felt more comfortable.

THE FOOD
You get lunch and dinner with Cathay Pacific and drinks served approx. 20 minutes after take off.  I couldn’t tell you how the food was asleep during both (although normally the food is pretty average). I did however raid the snack section which has pot noodles, toblerones, raisins, crackers and crisps.

BA25 serves dinner and breakfast.  I slept through dinner but breakfast was quite good.  BA also have a great snack selection in the galley. 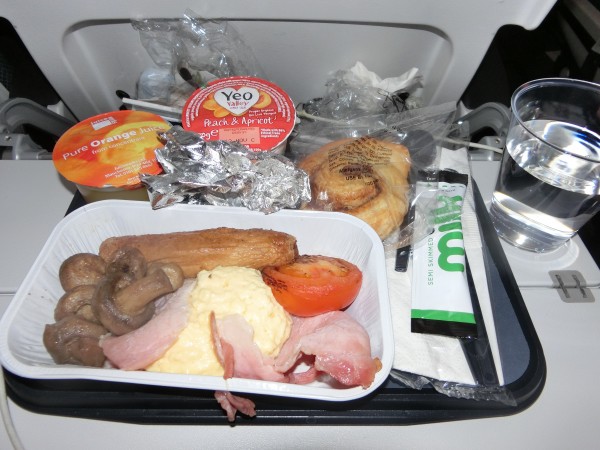 AMENITIES
I didn’t receive anything with Cathay apart from headphones, a pillow and a blanket.  I’m not sure if they would have given out more if it had been an overnight flight.

BA gave out headphones, a blanket and a toothbrush. On both flights you could use your own headphones as there is 1 hole although I would actually advise against this as I broke my headphone jack wedging myself in and out of the seat.

ENTERTAINMENT
Whilst Cathay have an excellent selection, the fact that you can use the BA system as soon as you get down is an absolute winner. Especially if you were traveling with kids.

STAFF
I was really impressed with staff on both airlines. Cathay’s are more understated and polished service whereas BA’s are more overtly friendly and chatty. 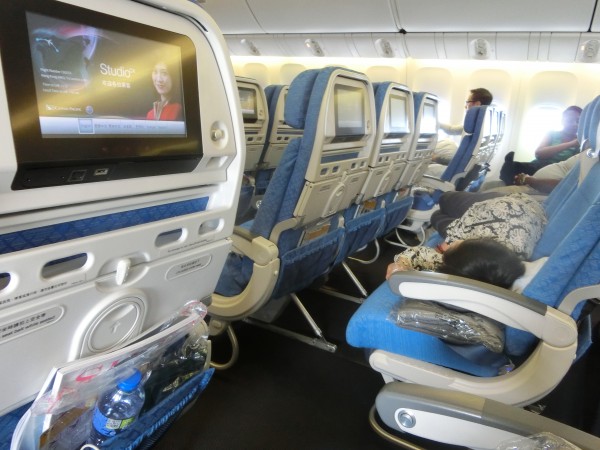 Despite the new cabin and glamour of the A380, my winner was Cathay Pacific. The reason for this?  I had an entire row to myself.  What this should teach you is that you shouldn’t pick your flight on assumptions. Every flight is different from its crew to the aircraft model.  Go into your flight prepared (pick a good seat on Seatguru and check in as early as you can).  Or save up all your airmiles and upgrade yourself to business class!